Another Tale Of Two Brothers


I've been puzzling over the story of Jacob wrestling God for a while.  It's a short story, a few verses in Genesis 32.  But it's the way it starts that puzzles me.

Gen 32:24 Then Jacob was left alone, and a man wrestled with him until daybreak.


How exactly does one start a wrestling match with a stranger?  Who started it? If this were a fight for survival with a stranger, why would Jacob choose wrestling as the best form of combat? The next verses don't help clarify the story


Gen 32:25  When he saw that he had not prevailed against him, he touched the socket of his thigh; so the socket of Jacob’s thigh was dislocated while he wrestled with him.Gen 32:26  Then he said, “Let me go, for the dawn is breaking.” But he said, “I will not let you go unless you bless me.”

One theory to explain this is that Jacob wrestled with himself, which fits with "Jacob was left alone". It could be seen as symbolic for when we wrestle with ourselves. That is, we each have a good side and an evil side, and Christians are supposed to wrestle with our evil thoughts and bring them into subjection. This battle takes place "Between The Ears". As much as I like the symbolism, the problem I see with that theory is that no one can dislocate their own thigh.

Another theory is that Jacob thought the man was Esau, and didn't know otherwise until the sun came up. That explains certain facts too, like why Jacob didn't use weapons. If a stranger came on you at night in the desert, you would be inclined to defend yourself in whatever way necessary. If you thought it was your brother, you would exercise restraint.

Focusing on how the wrestling match got started kept me from writing about a more important point in the story, perhaps the main point of the story. So I shelved this for a while because I didn't have a good explanation of how to start a wrestling match with a stranger. When I came back to it recently, I came up with a theory, but I'll get back to that.

Consider that someone gave Jacob the new name Israel.  If someone in a schizophrenic wrestling match renamed himself, would he choose a name that means "prevailed with God" or "prince of God"?  Note that afterwards, Jacob seems convinced he wrestled with God.

Why was it important for Jacob to get a new name?  That has a clearer answer.  It goes back to his birth with his twin brother Esau. The boys struggled [wrestled] so much in the womb that their mother Rebecca inquired of God.

Gen 25:23 The Lord said to her, “Two nations are in your womb; And two peoples will be separated from your body; And one people shall be stronger than the other; And the older shall serve the younger.”
24 When her days to be delivered were fulfilled, behold, there were twins in her womb.
25 Now the first came forth red, all over like a hairy garment; and they named him Esau.
26 Afterward his brother came forth with his hand holding on to Esau’s heel, so his name was called Jacob; and Isaac was sixty years old when she gave birth to them.


It's not apparent in translation, but notice that "THEY called his name Esau", then "his name was called Jacob". Hebrew scholars say that should be translated "HE called his name Jacob". In other words, Isaac AND Rebecca named Esau, but only Isaac named Jacob. Rebecca apparently didn't approve.

Jacob was named Heel Catcher, and he probably didn't like his name, though he fulfilled it.  Jacob tricked Esau out of his birthright, and later tricked his father Isaac out of the blessing meant for Esau. Esau's response:


Gen 27:36  And he said, Is not he rightly named Jacob? for he hath supplanted me these two times: he took away my birthright; and, behold, now he hath taken away my blessing.

There are interesting connections with English here.  We use the word heel as a derogatory term, usually male.  Also, a heel is crooked, we use the word crooked to describe a dishonest person.  Jacob was crooked in his dealings with his brother.  One might say Jacob "heeled" Esau these two times.  But Jacob learned his lesson at the hand of his father in law Laban, who tricked him like he tricked Isaac.  And Jacob wasn't crooked any more.  So he needed his name reset to reflect his new nature.

Right before his name change, Jacob insists on a blessing.  Did he receive some blessing other than the name change?  If he did, it's not in the text, here's all it says.

But look at the major events in the rest of Jacob's life.
Indeed, Jacob himself characterized his life like this.


Gen 42:9 So Jacob said to Pharaoh, “The years of my sojourning are one hundred and thirty; few and evil have been the years of my life, nor have they attained the years that my fathers lived during the days of their sojourning.”


The Name Change Is the Blessing

My assertion is the name change IS the blessing.  It is the central point of the wrestling story.  The wrestling story is a chiasm*, that is, verses arranged in a mirror image like a menorah.  One's attention is drawn to the central verse, meaning, it is the point of the story.  In this story, the central verse, which has no mirror image, is the name change.  No other blessings are mentioned.  Note the highlighted words mirrored around verse 28.

24 Then Jacob was left alone, and a man wrestled with him until daybreak.

25 When he saw that he had not prevailed against him,
he touched the socket of his thigh;
so the socket of Jacob’s thigh was dislocated while he wrestled with him.

but Israel; for you have striven with God and with men and have prevailed.”

29 Then Jacob asked him and said, “Please tell me your name.”
But he said, “Why is it that you ask my name?”

And he blessed him there.

30 So Jacob named the place Peniel, for he said,
“I have seen God face to face, yet my life has been preserved.”

31 Now the sun rose upon him just as he crossed over Penuel,
and he was limping on his thigh.

Just to make it more obvious, this chiasm is arranged like this. 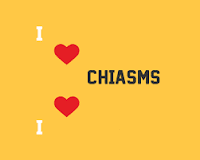 Jacob's name change was confirmed in Gen 35:9-16, which is also a chiasm, this time unambiguously by God Himself. Some say Jacob's name was changed twice, but my theory is that chapter 35 is a retelling of chapter 32. Esau  (which means doer - Abarim(Esau)) also had another name, which was Edom (which means red).

Jacob became Israel, he reconciled with Esau, and the story should end there, but strife continued between Esau's descendants and Jacob's descendants, and continues to this day. Apparently, Esau's descendants didn't get the memo about reconciliation.  Relations Of Edom And Israel [1]

Jacob wrestled with God (or an angelic representative), not Esau. I find it plausible that he thought he was wrestling with Esau at first. But why wrestling? I got hung up because I had been thinking of wrestling in modern terms, like Olympic wrestling with very specific rules. Biting and gouging the eyes are forbidden in nearly all types of wrestling, modern and ancient. Many styles don't  allow hitting, some don't even allow holds below the waist wiki(Greco-Roman_wrestling) [2], but it was not always so. In ancient times, wrestling was training for soldiers, and in combat, wrestling would have been a fight to the death. In ancient sport wrestling, submission was the goal. Submission wrestling still exists, one match in the 1912 Olympics lasted six hours without a decision - Britannica(Wrestling) [3]. Ancient wrestling was more akin to what we would call hand to hand combat, or mixed martial arts, where anything goes wiki(Pankration) [4].

The notion that Jacob thought it was Esau explains why he didn't use a knife or a rock to win. God (or angel) matched him move for move. The Hebrew word abaq translated here as wrestle Lexicon-Concordance [5] appears nowhere else in the Bible. It's root means dust.  They got dusty.  They wrestled in the dirt. We have an expression 'dust up', meaning a fight. Jacob's wrestling match appears to be more like submission wrestling, but less than a fight to the death.

I still don't know who started it.

The following is from Gotquestions(chiasm) [6]

*A chiasm (also called a chiasmus) is a literary device in which a sequence of ideas is presented and then repeated in reverse order. The result is a “mirror” effect as the ideas are “reflected” back in a passage. Each idea is connected to its “reflection” by a repeated word, often in a related form. The term chiasm comes from the Greek letter chi, which looks like our letter X. Chiastic pattern is also called “ring structure.”

The structure of a chiasm is usually expressed through a series of letters, each letter representing a new idea. For example, the structure ABBA refers to two ideas (A and B) repeated in reverse order (B and A). Often, a chiasm includes another idea in the middle of the repetition: ABXBA. In this structure, the two ideas (A and B) are repeated in reverse order, but a third idea is inserted before the repetition (X). By virtue of its position, the insertion is emphasized.
Chiasmus Exchange [7] lists all known chiasms in the Bible. The list keeps growing, as of Jan 7 2019, they list 1929 chiasms! There are chiasms in every book of the Bible, Old and New Testament. Genesis for example has 92 chiasms. Some are small, some span several chapters. Chiasms are used as a literary device to focus attention on the center verse or phrase. They also can serve as a memory aid. Feel free to read my blog article Rhythm And Rhyme [8] where I discuss the chiastic structure of Psalm 67. The Bible has fantastic depth of structure that we are not always aware of. Chiasms are a surprisingly common type of structure to help us gain meaning beyond the words written. Nearly all the Biblical chiasms are visible in English too, occasionally a chiasm word will be translated two different ways, but rarely, and Chiasmus Exchange has found those as well.