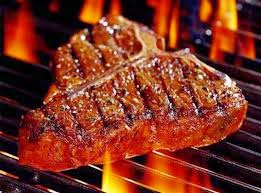 Americans have a love/hate relationship with fat. We have low fat diets and high fat diets. At the same time, we have an obesity epidemic (WebMD) [1]. Now "they" talk about good fats and bad fats (Mythbuster) [2]. Dietary fat is not the sole cause of obesity, but it plays a significant role (WebMD) [3]. I don't know nearly enough to offer dietary advice, I want to explore fats from a Biblical angle.

I had always thought that the Bible forbade eating fat, so I trimmed my steaks, but I also believed "marbled fat is OK". Was this only kidding myself? What about sausages or hamburger? Even if the package says 90% lean, the other 10% is still fat (assuming that's bad of course). The problem is that fat is tasty, lots of flavors like spices are soluble in fat, making it even tastier.

The first thing to clear up is that I am talking about meat and fat from "clean" animals, that is cows, sheep, goats, deer, but not pigs, bear, or dogs. You can read What Does the Bible Teach About Clean and Unclean Meats [4] for a more thorough explanation.

Here is why I thought the Bible forbade eating fat, Lev 3:17 "It shall be a perpetual statute throughout your generations in all your , that ye shall eat neither fat nor blood."  But then in Neh 8:10 it seemingly says the opposite "Then he said unto them: 'Go your way, eat the fat'". Which is it? Eat it or don't eat it? Chew the fat or eschew the fat...

Fat is often used in a positive way in the Bible. See Is 25:6 And in this mountain will the LORD of hosts make unto all peoples a feast of fat things. Some argue that fat here and in Neh 8 is not literal fat, but fatness, or rich food. That just means it is the best part. The prodigal son's father brought out the fatted calf, the best.

I was surprised to learn that fat is translated from two different words in these two verses. Lev 3:17 uses the Hebrew word chelev, while Neh 8:10 uses shamen. Shamen is often translated oil. Chelev is explained earlier in Lev 3, verse 9 "And he shall present of the sacrifice of peace-offerings an offering made by fire unto the LORD: the fat thereof, the fat tail entire, which he shall take away hard by the rump-bone; and the fat that covereth the inwards, and all the fat that is upon the inwards". This is more or less what we call suet in English. Again, it is the best part.

Lev 7:23-25 clarifies Lev 3:17 in that not all suet is forbidden, only that from animals that can be used in a temple sacrifice, specifically cows, sheep, and goats. "Only the chelev of animals that are of the sort from which offerings can be brought in the Tabernacle or Temple are prohibited"  Wikipedia Chelev [5] "For every person who eats of the fat of an animal of which a food offering may be made to the LORD shall be cut off from his people" Lev 7:23-25. Some interpret this verse to pertain only to animals actually used in offerings, not ordinary food.  I lean toward the view in the Wiki quote. So you can keep your jar of schmaltz (chicken fat). But all manner of blood is still forbidden (Lev 7:26).

Even from a clean animal, there are parts that are not food, like teeth, hide, fur, or feathers. The Bible adds chelev to this list. One of the things we learn from clean versus unclean is that this knowledge had to be revealed. We would not figure it out on our own. In recent times, humans have found health reasons for many of the Biblical dietary laws, including clean and unclean meats.
But Israel could not have figured it out 3500 years ago - it was revealed to them way ahead of modern science. And yet, bottom feeding carp is clean, go figure, so there are still mysteries to explain. [The Bible does not say it is because of health reasons however, it says to distinguish between clean and unclean, to be separate and holy.]* Following Biblical dietary laws is one way that believers separate themselves. Most everyone is aware of the Jewish people because of their observance of Kosher food. As someone who is not Jewish but avoids pork and shellfish, the most common unclean meats in America, I get noticed for it. But with so many vegans and vegetarians today, most people accept dietary restrictions. Sometimes it leads to a discussion of why. Read a discussion of it in the UCG article Clean and Unclean Meats [4].

For decades, I have avoided unclean meats, but never considered the other laws about meat. There is very thorough teaching demonstrating that the laws concerning clean and unclean meats are still applicable today, but no discussion of chelev versus shamen. There are other prohibitions in the Bible about meats to consider as well, like "the proper removal of blood, and the animal's manner of death" Let's Chew the Fat [6]. So let's talk about Kosher.

What is the difference between  Biblically kosher and Rabbinic Kosher? Certainly, the rabbinic notion of kosher is based on the Bible but takes into account more than just whether the animal is clean or not. "The Rabbinical tradition is far more intricate than just literally following what the Bible says in Leviticus 11 ... There are laws explaining how an animal should be slaughtered in the Bible" Biblical vs Rabbinical Kosher [7].

Is Halal the same as Kosher?

The Hebrew dietary laws are known as kosher, which simply means "fit", as in fit to eat. Halal is the Islamic dietary law,  where halal means "lawful". Although there are many similarities, like avoiding pork, there are differences. Halal requires that "the name of Allah is said before the slaughter". Having Allah's name on my steak feels like "meat sacrificed to idols" Acts 15:20, 1Cor 8:4. Read more at Are You Eating Meat Sacrificed to Idols? [8]. There is lots of debate on this. My understanding is "don't ask", but if you know the meat is sacrificed to idols, "don't eat". A blessing is usually said before a Kosher slaughter, but not required Islamic/Kosher Dietary Laws [9]. Here's the big difference in this context "Kosher prohibits the eating of chelev, but halal does not." Other similarities and differences are listed at at the Wikipedia link.

I don't butcher my own cattle, so I am at the mercy of the butcher. Will a non Kosher butcher trim the chelev? Or do they throw it in the generic ground beef? By regulation (in America), ground chuck or ground sirloin has to be just that, and it can't have scraps from other parts of the animal. But generic ground beef? Or sausages? Fast food burgers?

Does that mean I have to buy all my meat at a kosher butcher who  has had special training? According to Wikipedia [9], "Any sane adult Jew who knows the proper technique may perform the shechita (slaughter)" I would think this applies to anyone, not just Jews. After all, the laws were given to all Israel, Judah being only one of twelve tribes.  So if I did butcher my own animal and removed the chelev, the meat should be "fit". Assuming the animal was slaughtered properly, cuts of meat like steaks and roasts would be safe because there is no chelev there. And ground chuck/round/sirloin is OK for the same reason. The meats that make me uncomfortable are ground beef and sausage. Unless I trust the butcher to remove the chelev (I suppose I could ask him), these products may not be fit.

When I started to write this, I only thought to write about chelev versus shamen showing that certain fats were OK (yes, marbling is OK), but I didn't realize I would end up finding out meats that would not be fit, and that I would have to change. If you care about clean and unclean meats, you too may see a need for change.