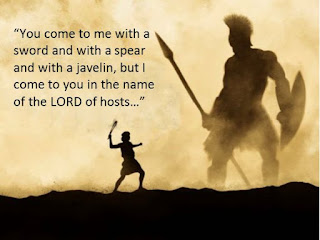 The story of David and Goliath is well known, even to people unfamiliar with the Bible. "The phrase "David and Goliath" has taken on a more secular meaning, denoting an underdog situation, a contest where a smaller, weaker opponent faces a much bigger, stronger adversary." - Wikipedia [1]. That is, David is portrayed as the underdog. After all, he is (probably) a teenager at the time, while Goliath is (probably) eight feet tall and a seasoned warrior. Yet David kills Goliath in the Valley of Elah.


But is David really the underdog? Malcom Gladwell makes the argument that David had the advantage, and Goliath was simply big and clumsy and nearly blind - David and Goliath [2]. Let's review the original story, and Gladwell's ideas, then decide for yourself.

[taken from Bible Story Summaries [3], my comments in purple]

The Philistine (Paelishti in Hebrew) army had gathered for war against Israel. The two armies faced each other, camped for battle on opposite sides of a steep valley (Valley of Elah). A Philistine giant measuring over nine feet tall (some mss read four cubits and a span, some read six cubits and a span) and wearing full armor came out each day for forty days, mocking and challenging the Israelites to fight. His name was Goliath. Saul, the King of Israel, and the whole army were terrified of Goliath. Saul was a head taller than the rest of Israel, one could argue he is the one who should fight Goliath.

One day David, the youngest son of Jesse, was sent to the battle lines by his father to bring back news of his brothers. David was probably just a young teenager at the time. While there, David heard Goliath shouting his daily defiance, and he saw the great fear stirred within the men of Israel. David responded, "Who is this uncircumcised Philistine that he should defy the armies of God?" 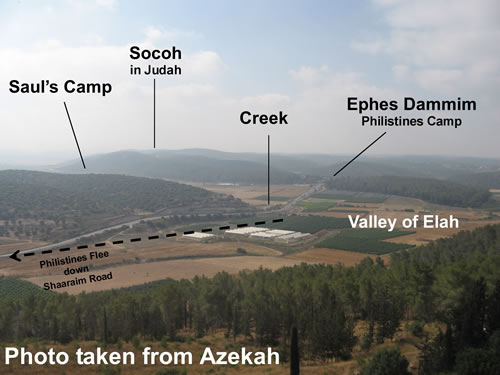 So David volunteered to fight Goliath. It took some persuasion, but King Saul finally agreed to let David fight against the giant.

Dressed in his simple tunic, carrying his shepherd's staff, sling and a pouch full of stones (specifically FIVE stones), David approached Goliath. The giant cursed at him, hurling threats and insults.

David said to the Philistine, "You come against me with sword and spear and javelin, but I come against you in the name of the Lord Almighty, the God of the armies of Israel, whom you have defied ... today I will give the carcasses of the Philistine army to the birds of the air ... and the whole world will know that there is a God in Israel ... it is not by sword or spear that the Lord saves; for the battle is the Lord's, and he will give all of you into our hands."

As Goliath moved in for the kill (actually Goliath said "come to me"), David reached into his bag and slung one of his stones at Goliath's head. Finding a hole in the armor (the Bible doesn't say anything about a hole in the armor), the stone sank into the giant's forehead, and he fell face down on the ground. David then took Goliath's sword, killed him and then cut off his head. When the Philistines saw that their hero was dead, they turned and ran. So the Israelites pursued, chasing and killing them and plundering their camp.


Gladwell Gets A Turn

First, let's look at Goliath, the warrior. Due to manuscript discrepancies, all we know is that he was six feet nine inches or nine foot nine inches. And he had an attendant, called a shield bearer. Gladwell contends that Goliath had a medical problem.

What many medical experts now believe, in fact, is that Goliath had a serious medical condition. He looks and sounds like someone suffering from what is called acromegaly— a disease caused by a benign tumor of the pituitary gland. The tumor causes an overproduction of human growth hormone, which would explain Goliath’s extraordinary size. One of the common side effects of acromegaly is vision problems. Pituitary tumors can grow to the point where they compress the nerves leading to the eyes, with the result that people with acromegaly often suffer from severely restricted sight and diplopia, or double vision. Why was Goliath led onto the valley floor by an attendant? Because the attendant was his visual guide. Why does he move so slowly? Because the world around him is a blur.  (p. 14)


Let's look at David. He was skilled in slinging. Slings of old were serious weapons, not like the slingshots I played with as a kid. Yes, you could put someone's eye out. Gladwell gives a lesson in ancient warfare.


Ancient armies had three kinds of warriors. The first was cavalry— armed men on horseback or in chariots. The second was infantry— foot soldiers wearing armor and carrying swords and shields. The third were projectile warriors, or what today would be called artillery: archers and, most important, slingers. Slingers had a leather pouch attached on two sides by a long strand of rope. They would put a rock or a lead ball into the pouch, wing it around in increasingly wider and faster circles, and then release one end of the rope, hurling the rock forward.  (p. 9)

The historian Baruch Halpern argues that the sling was of such importance in ancient warfare that the three kinds of warriors balanced one another, like each gesture in the game of rock, paper, scissors. With their long pikes and armor, infantry could stand up to cavalry. Cavalry could, in turn, defeat projectile warriors, because the horses moved too quickly for artillery to take proper aim. And projectile warriors were deadly against infantry, because a big lumbering soldier, weighed down with armor, was a sitting duck for a slinger who was launching projectiles from a hundred yards away.  (p. 10)


Moshe Dayan said  “David fought Goliath not with inferior but (on the contrary) with superior weaponry" (p. 16)

So Goliath was infantry, and David was a projectile warrior.  David was a slinger, and slingers beat infantry, hands down. In today's terms, it would be like the time Indiana Jones shot the Arab swordsman in Raiders of the Lost Ark [4]. Goliath brought a sword to a gunfight, so to speak.

Abraham Kuruvilla is a Research Professor of Pastoral Ministries at Dallas Theological Seminary. His article DAVID V. GOLIATH (1 SAMUEL 17) [5] approaches this confrontation between David and Goliath differently from Gladwell. He points out that "no one else in the narrative was thinking of God, and no one else was considering the perspective of God."  - [5] That is to say, no one but David. And that is true of Gladwell as well, who doesn't bring God into the discussion at all. It was not about Philistia versus Israel, it was about whose god was superior. "Goliath, it seems, was sure that Dagon, the Philistine deity, was on his side; but Israel was not entirely certain that Yahweh was on theirs, as evident in their terror-stricken flight... A duel would reflect the supremacy of one god or the other." [5] When Goliath taunted Israel in the morning and the evening, it was to disturb the Israelites in their prayers - Wikipedia [1], showing Goliath knew it was a contest of the gods. David took God's perspective immediately, saying "Who is this uncircumcised Philistine that he should defy the armies of the living God? - 1 Sam 17:26. In Kuruvilla's words "The narrative of 1 Samuel 17 is about situations where God’s name is at stake, where his reputation is on the line" - [5].

In the lead up to the battle, everyone, including King Saul was looking on the outside, the size of Goliath, the weight of his armor, the size of his spear, etc. David rejected Saul's armor, which would have matched Goliath's. In fact, "Should anyone have been picked for the task of fighting the giant, it ought to have been Saul, whose biodata (I didn't know that was a real word), accouterments, and résumé fitted the bill exactly. Saul had it all: stature, resources, and experience... Looking only at the outside, Saul had neglected to see with the eyes of God, with the fear of God, and with trust in God." - [5] Saul had already taken on a king who defied Israel in 1 Sam 11, but this time he shrunk back.

Saul's behavior is part of a larger story where God removed the kingdom from Saul in chapter 15, and anointed David as king in chapter 16. In choosing a son of Jesse, God passed over David's oldest brother Eliab saying "People look at the outward appearance, but the Lord looks at the heart." - 1 Sam 16:7. Eliab was there on the front line, but like everyone else, looking on the outside, not recognizing whose battle it was. "David, it appears, does not need to teach Israel that Yahweh delivers, but only that he delivers without sword or spear." [5]

Gladwell makes the point that the mighty may not be as mighty as they think, and the underdog may not be as weak as they think. Underdogs actually win a lot. Goliath's only advantage was in close fighting, swords and clubs and strength. Spiritualizing for a moment here, Goliath represents the enemy, who wants to fight on his terms. We don't have the strength to win the battle on his terms. We need to use the right resources to overcome, like the five smooth stones (the five books of Moses?) . Or more accurately, God Himself provides the victory.

Kuruvilla makes the point that David was fighting God's battle, "the battle is the Lord's" - 1 Sam 17:47. Many battles are of our own making, and we want God to fight on our side. How often do we fight for God's name and reputation?

The battle may not be as it appears. If we look at the outside, the circumstances of life, we may miss the real battle taking place in the heart, and between the ears.

Was Goliath the underdog?