The Throne of David And The Daughters Of Zelophehad

The Lord said to David on his deathbed.

It says the Messiah will sit on David's throne forever.

Isa 9:7  Of the increase of his (Messiah) government and peace there shall be no end, upon the throne of David, and upon his kingdom, to order it, and to establish it with judgment and with justice from henceforth even for ever. The zeal of the LORD of hosts will perform this.

And that Jeconiah's descendants will not sit on that throne, (he is mentioned by name in Jer 22:28).


Jer 22:30 Thus says the LORD, 'Write this man (Jeconiah) down childless, A man who will not prosper in his days; For no man of his descendants will prosper Sitting on the throne of David Or ruling again in Judah.'

Chuck Missler sums up the problem this way.

This curse created a rather grim and perplexing paradox: the Messiah had to come from the royal line, yet now there was a"blood curse" on that very line of descent! Koinonia House [1]

The Beginning of the Solution 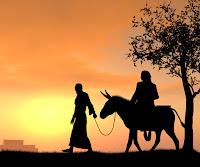 The genealogy of Jesus given by Matthew shows Mary's husband Joseph to be a descendant of David, Solomon, and Jeconiah. Does this imply that Joseph was in line to be king of Judah? IDK. If you compare this genealogy to 1 Chronicles 3:15–16, you will note that some kings are actually skipped, basically for wickedness - Genealogy of Jesus [2]. Note also that Jeconiah is also called Jechonias, Coniah, and Jehoiachin. Verses skipped for brevity.

Mat 1:11  And Josias begat Jechonias and his brethren, about the time they were carried away to Babylon:

Mat 1:16  And Jacob begat Joseph the husband of Mary, of whom was born Jesus, who is called Christ.

But the genealogy given by Luke lists the ancestors of Mary. Notice that Nathan, not Solomon is listed. This neatly avoids the blood curse on Jeconiah. Again, verses skipped for clarity.

Luk 3:23  And Jesus himself began to be about thirty years of age, being (as was supposed) the son of Joseph, which was the son of Heli,

In the Greek, Joseph is named without a definite article, meaning the genealogy is Mary's - ChristianityStackExchange [3]. The phrase "as was supposed" occurs in nearly all English translations; it is taken from enomizeto, meaning "by law", showing Jesus as the legal heir of Joseph - BibleOne [4]. Joseph is considered more of a son than a son-in-law in this case.

So, it took a virgin birth to get around the blood curse of Jeconiah. But does it place Him on the throne of David? 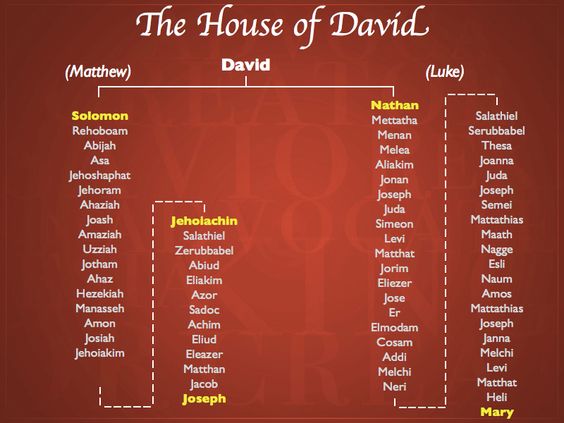 Enter the Daughters of Zelophehad

There is an exception to the law of inheritance. If a man has only daughters, inheritance could pass to them as long as they married within the tribe. The daughters of Zelophehad got a judgment from Moses, and set a precedent.

Num 36:6  This is the thing which the LORD doth command concerning the daughters of Zelophehad, saying, Let them marry to whom they think best; only to the family of the tribe of their father shall they marry.

The Bible doesn't record it, but apparently Heli (Mary's father) had no sons, so Mary could actually pass on Heli's inheritance to Jesus - [1]. Note that Heli (really Eli since he was a Jew) means "My God" - Abarim Publications [5]. The only other Eli in the Bible is the High Priest of ancient Israel, whose sons Hophni and Phineas were not righteous men and were rejected by God. Eli raised Samuel as his own son. Samuel became a prophet and judge of Israel, but could not be High Priest because he was not of the line of Aaron - ChristianityStackExchange [6]. The point is that Heli's inheritance passed to Jesus - does that include the right to the throne of David? Having male heirs to pass on one's name was extremely important in that culture, it figures prominently in the story of Boaz and Ruth - The Kinsman Redeemer [7].
Enter The Critics
This paints a nice workaround to the inheritance puzzle created by Jeconiah's curse, but is it necessary? The Zelophehad theory was first presented by C.I. Scofield, circa 1910 in the Oxford NIV Scofield Study Bible [8], promoted by Chuck Missler [1], where I first heard it. But first-century Christians believed that Jesus fulfilled the messianic promises of the Old Testament, which included David's throne, without ever mentioning Zelophehad. In fact, the New Testament writers never acknowledge that there was such a problem to overcome - Jeconiah's Whammy [9]. On the other hand, they knew the inheritance laws from experience and didn't need them explained.
The promise to David cited above is unconditional, and looks like God promised an unbroken dynasty from David to the Messiah. It is difficult for me to see it otherwise. It says David's throne would be "established forever". Yet in terms of Solomon's dynasty, Jeconiah was the end of the road. Some scholars insist that kingship can only be passed on through the male line, but not to adopted sons. By that reasoning, Joseph was the royal line, but couldn't pass it to an adopted son - Wikipedia(Davidic Dynasty) [10]. If you accept the Zelophehad theory, the scepter of kingship passed to Jesus Christ  through Mary, but not in a way that satisfies everyone. The Zelophehad theory assumes Mary had no brothers, which seems like a detail that should not be omitted from the record if inheritance, indeed the monarchy, depends on it. Since Nathan was never a king, are his descendants eligible to ascend to the throne of David? And if Nathan's line were selected over Solomon's, did it pass to Heli? An alternate explanation is that the scepter still came through Joseph, but ancestry came through Mary. Going back to David on his deathbed, it appears that the perpetual dynasty is to come through Solomon.

2Sa 7:13  He (Solomon) shall build an house for my name, and I will establish the throne of his kingdom for ever.

Some explain the unbroken succession of Solomon's line survived because the prophet Jeremiah took the daughters of King Zedekiah (Jeconiah's uncle) of Solomon's line, and brought them to Ireland. They married royalty there, and according to this theory, are the ancestors of the British throne, that is the British throne is David's throne. Adherents to this say when Christ returns, He will take over and sit down on an existing throne of David, here on earth - Church of the Eternal God [11]. They neglect the large gaps where an heir of David was not on the throne of England - Hope Of Israel [12]. They say the meaning of Luke 1:32 is that an heir will be sitting on David's throne at Christ's return, but does it really say the throne will exist on earth at the time of the end? With an heir of David on it?

Luk 1:32  He shall be great, and shall be called the Son of the Highest: and the Lord God shall give unto him the throne of his father David:

Also, the Bible also says that Israel will be without a king.

Some scholars say that when  David received the promise that his house, his kingdom, and his throne would be established forever (2Sa 7:16), it did not mean an unbroken monarchy.

God did not promise an unbroken monarchy but an unbroken line of descendants from David who would be qualified to sit on that throne when it was reestablished. David’s line would not fail before the righteous Branch came to claim His throne (cf. Luke 1:31-33). The genealogies of Matthew and Luke show that this promise was fulfilled as Christ was able to trace both His legal line through Joseph and His physical line through Mary back to David (Matthew 1:1-16; Luke 3:23-31) - Bible Knowledge Commentary [13].

Meaning, qualified descendants, not necessarily kings. Which brings us back to the daughters of Zelophehad. In the end, the exact meaning of God's promise to David is unclear to me, and beyond my scholarship. When Christ returns, He comes as King of Kings, and will sit of the throne of David. When and where He was or will be given the throne of David is not clear to me.

I started writing this thinking I had a nice small topic, a lesser known nugget of Bible truth to share, inspired by the teaching of Chuck Missler. But like many things Biblical, I didn't find consensus. But I didn't want to waste all that research, so I tried to cover the different points of view - I still find it interesting, even if I don't have certainty. Until Jesus does return and set the record straight, the best I can say is to do your own research, and draw your own conclusions. And please, share your thoughts with me.