Gospel of the Firstfruits 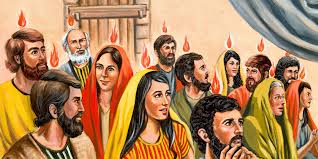 Whenever I thought of the New Testament Pentecost, I would immediately jump to Acts 2:1

Act 2:1  And when the day of Pentecost was fully come, they were all with one accord in one place.

But in reading Acts recently, I was struck by  Acts 1:8, where Jesus talked to His disciples and set the stage for the Pentecost to come in a few days.

Act 1:8  But you will receive power when the Holy Spirit comes upon you, and you will be My witnesses in Jerusalem, and in all Judea and Samaria, and to the ends of the earth.

I had always focused on the miraculous part of the day – tongues of fire and receiving the Holy Spirit. But 1:8 says two things, receive power AND witness. And that witness is to flow out from Jerusalem to the ends of the earth.

Let’s look at the first chapters of Acts to see how Acts 1:8 was fulfilled.

In Acts 2, those disciples keeping Pentecost received the Holy Spirit in miraculous fashion. “They saw tongues like flames of fire that separated and came to rest on each of them.” - Berean Study Bible. The KJV says cloven or divided tongues, but commentaries agree that it was the fire was divided among the people, not the tongues that were divided. What did they do? They apparently left the house where they were meeting and started talking to people, because a crowd had gathered. They gathered because they had heard the “sound from heaven as of a rushing mighty wind” vs 2. Then they heard the disciples speaking in their own language.

Peter takes charge and preaches to the crowd.

Act 2:14 But Peter, taking his stand with the other eleven, raised his voice and declared to them: “Men of Judea and all you who live in Jerusalem, know this, and pay attention to my words.

This is how the church started. Notice how Peter’s first words echoed Jesus’ words days earlier.

1:8 ye shall be witnesses unto me both in Jerusalem, and in all Judaea

2:14 Ye men of Judaea, and all ye that dwell at Jerusalem

Peter’s discourse ends with the familiar words “repent and be baptized” - Acts 2:38. And the fruits of this sermon? 3,000 were baptized. [Logistical question – how do you baptize 3000 people in Jerusalem? If only the twelve apostles laid on hands on them all, that's 250 per apostle.]

Which reminds me of the beginning of Jesus’ own ministry recorded in the book of Mark.

Jesus is the firstborn of many brethren (Rom 8:29), or you could say “First of the firstfruits”. The Jewish tradition is to call the Wave Sheaf Day Firstfruits – that is the day that Jesus was “waved” before God the Father. In our tradition, Pentecost is sometimes called Firstfruits. Both days are associated with Firstfruits in Lev 23:9,17 - The Omer - Make Mine A Double [1], so it is natural that the NT church would be doing the same thing that Jesus did, preaching the gospel.

Continuing in the book of Acts, cherry picking verses to show the progression out from Jerusalem.

Act 2:22  Ye men of Israel
Act 2:36  Therefore let all the house of Israel know
Act 3:12  And when Peter saw it, he answered unto the people, Ye men of Israel
Act 4:10  Be it known unto you all, and to all the people of Israel
Act 5:16  There came also a multitude out of the cities round about unto Jerusalem
Act 5:42  And daily in the temple, and in every house, they ceased not to teach and preach Jesus Christ.
Act 6:7  And the word of God increased; and the number of the disciples multiplied in Jerusalem greatly; and a great company of the priests were obedient to the faith.


In chapter 8, we see the word spread to Samaria.

Act 8:1  And Saul was consenting unto his [Stephen’s] death. And at that time there was a great persecution against the church which was at Jerusalem; and they were all scattered abroad throughout the regions of Judaea and Samaria, except the apostles.

Act 8:4  Therefore they that were scattered abroad went every where preaching the word.

Act 8:5  Then Philip went down to the city of Samaria, and preached Christ unto them.


Then, the gospel goes out of Israel altogether when Philip baptizes the Ethiopian eunuch.

Act 8:26  But an angel of the Lord spoke to Philip, saying, “Get ready and go south to the road that descends from Jerusalem to Gaza.” (This is a desert road.)

Act 8:27  So he got ready and went; and there was an Ethiopian eunuch, a court official of Candace, queen of the Ethiopians, who was in charge of all her treasure; and he had come to Jerusalem to worship,
Act 8:28  and he was returning and sitting in his chariot, and was reading Isaiah the prophet.

According to church tradition, this man was to become an evangelist among his own people. From the Standing Conference of Oriental Orthodox Churches article on the Ethiopian church:

Ethiopia embraced Christianity and has maintained its doctrines from the era of the apostles to the present day. Acts 8:26-39 recounts the story of the Ethiopian eunuch who was baptized by St. Philip. This eunuch was a minister of Candace, Queen of Ethiopia. This story is the beginning of Ethiopian Church history. Eusebius speaks of this eunuch as the first fruits of the faith in the whole world. Irenaeus writes that he preached the Gospel to the Ethiopians. Tradition further records that the apostle Matthew preached the gospel to the Ethiopians and won a few converts to the new doctrine before leaving the country.   SCOOCH.org(Ethiopian_Church) [2]

Irenaeus gives his name as Simeon Bachos the Eunuch. In Ethiopian Orthodox Tewahedo tradition he was referred to as Bachos and in Eastern Orthodox tradition he is known as an Ethiopian Jew with the name Simeon also called the Black, the same name he is given in Acts 13:1.  Wikipedia(Ethiopian_eunuch) [3]

The only pre-colonial Christian church of Sub-Saharan Africa, the Ethiopian Church has a membership of between 40 and 45 million.  Wikipedia(Christianity in Ethiopia) [4]

In Acts 9, we read of the conversion of Paul. Here is what Jesus said about Paul.

Act 9:15  But the Lord said unto him,Go your way: for he is a chosen vessel unto me, to bear my name before the Gentiles, and kings, and the children of Israel:

As the final example from Acts, Peter has a vision, which culminates in the Gentiles receiving the Holy Spirit just like the original 120 disciples.

Act 10: 37 you yourselves know the thing that happened throughout Judea, starting from Galilee, after the baptism which John proclaimed.

Act 10:42  And he commanded us to preach unto the people, and to testify that it is he which was ordained of God to be the Judge of quick and dead.

Act 10: 43 All the prophets testify of Him, that through His name everyone who believes in Him receives forgiveness of sins.”
Acts 10:44 While Peter was still speaking these words, the Holy Spirit fell upon all those who were listening to the message.
Acts 10:45 All the Jewish believers who came with Peter were amazed, because the gift of the Holy Spirit had also been poured out on the Gentiles.
Acts 10:46 For they were hearing them speaking with tongues and exalting God.

I think we have all had the experience of reading a scripture many times, then one day seeing something new in it. This was one of those moments for me, realizing how Pentecost was also about spreading the gospel, not just receiving the Holy Spirit.

In Acts chapters 2-7, we see the church growing in Jerusalem, with people coming from the rest of Judea to Jerusalem just to hear the word.

In chapter 8, due to persecution, the church scatters to Judea and Samaria, preaching the word as they went.

In chapters 8-10, the gospel goes outside Judea, by the Ethiopian eunuch, by the apostle Paul, and after Peter’s vision, the Gentiles received the Holy Spirit like those keeping that first Pentecost after Christ’s resurrection.

What about today? We also know from

Mat 24:14  And this gospel of the kingdom shall be preached in all the world for a witness unto all nations; and then shall the end come.

A gospel has been preached in (nearly) all the world, a gospel about Christ. But we believe it is not THE gospel OF Christ, that is, not the gospel He preached. People don’t want to hear the gospel OF Christ because it begins with the word repent. Which leads to the question, “repent of what?” Which leads to the 10 Commandments. And people don't want to hear a message about the 10 Commandments that starts with the word REPENT.

We also know that in the end of days, God will call a great multitude. It seems that every generation since Christ has thought that it was the final one before His return, but I certainly believe we are in the end time, that we ARE that generation.

Rev 7:9 After these things I looked, and behold, a great multitude which no one could count, from every nation and all the tribes, peoples, and languages, standing before the throne and before the Lamb, clothed in white robes, and palm branches were in their hands;

Note this is right before the opening of the seventh seal Rev 8:1

Perhaps it is presumptuous  to think that we in the Churches of God will preach that witness to the world AND a great multitude will respond. Personally, I’ve had almost no success persuading  family and friends during my 40 years in the church. [I might have more success if I had a tongue of fire on my head.] But someone WILL preach the gospel of Christ. Maybe we will just pass the baton to those will preach the final warning, but I believe we are that generation. We shall see.

You may be thinking “How? What can I do?” Tell your story. Remember what happened when the early church suffered persecution.

Act 8:4  Therefore they that were scattered abroad went every where preaching the word.

The early church received the Holy Spirit on that Pentecost to equip them to do the job of preaching the gospel. Jesus told them they were going to receive power from on high. In their case, it was “signs and wonders”. Maybe on some future Pentecost, we will receive special power to tell the mighty works of God like they did; and people will listen.

Acts 2:1 When the day of Pentecost had come, they were all together in one place. 2 And suddenly a noise like a violent rushing wind came from heaven, and it filled the whole house where they were sitting. 3 And tongues that looked like fire appeared to them, distributing themselves, and a tongue rested on each one of them. 4 And they were all filled with the Holy Spirit and began to speak with different tongues, as the Spirit was giving them the ability to speak out.

5 Now there were Jews residing in Jerusalem, devout men from every nation under heaven. 6 And when this sound occurred, the crowd came together and they were bewildered, because each one of them was hearing them speak in his own language. 7 They were amazed and astonished, saying, “Why, are not all these who are speaking Galileans? 8 And how is it that we each hear them in our own language to which we were born? 9 Parthians, Medes, and Elamites, and residents of Mesopotamia, Judea, and Cappadocia, Pontus and Asia, 10 Phrygia and Pamphylia, Egypt and the parts of Libya around Cyrene, and visitors from Rome, both Jews and proselytes, 11 Cretans and Arabs—we hear them speaking in our own tongues of the mighty deeds of God.” 12 And they all continued in amazement and great perplexity, saying to one another, “What does this mean?” 13 But others were jeering and saying, “They are full of sweet wine!”