A few Bible controversies never seem to die, some of them revolve around what day something happened. Here are four such controversies. My goal is to explain my understanding of each one.

If you like this (or not), check out my other articles at the
Between The Ears BLOG INDEX, with titles and summaries.
And click the "Follow" button so you don't miss an article.

What day was Jesus Christ crucified? 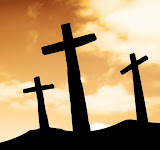 Most professing Christians  believe Jesus was crucified on a Friday, and was resurrected on a Sunday, as in Good Friday to Easter Sunday. The problem is that Jesus said He would  be in the heart of the earth (dead) for three days and three nights. And this would be the sign that He was the Messiah.

No one doubts Jonah was in the belly of the fish for three days and three nights, but when it comes to Jesus in the tomb, many count partial days as whole days, contradicting the plain words of the text. There is a better explanation.
Jesus was crucified on Passover, which happened to be a Wednesday that year. He died that Wednesday afternoon, and was buried near sunset, and sunset began the Holy Day called the First Day of Unleavened Bread. Three days and three nights later is late Saturday again near sunset. This is the time of His resurrection, but He didn't ascend to Heaven until the next morning. As far as  I know, all Christians agree that He ascended on that Sunday morning.
Mark 15:42 explains the urgency in needing to bury Jesus immediately because that day was the preparation day, that is preparation for the Sabbath. This does not mean the weekly Sabbath which would imply the crucifixion was on a Friday, but it means the First Day of Unleavened Bread, which is made clear in John 19:31.

While many Christians believe the crucifixion took place on Friday, the well known commentator E. W. Bullinger (1837 to 1913) worked out that it happened on a Wednesday. In Appendix 156 to the Companion Bible, titled "Six Days Before the Passover", Bullinger wrote:

It follows, therefore, that the Lord was crucified on our Wednesday; was buried on that day before sunset; and remained "three days and three nights' in the tomb, as foretold by Him in Matt. 12:40; rising from the dead on the third day', 'the first day of the week'. The fixed days and dates, at either end, hold the whole period as in a vice, and place the whole subject on a sure foundation. Companion Bible, Appendix 156 [1]

What Day Did Israel Leave Egypt? 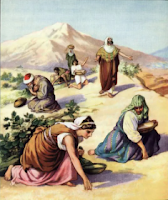 It is straightforward to determine the day of the Exodus, there are a couple clues that make it possible. Those clues are in the story of the giving of manna, explained in Exodus 16. Arriving in the Wilderness of Sin, the Israelites complained. God heard their complaint and promised them meat that night and bread (manna) in the morning. They received manna for six straight days then on the Sabbath, no manna.  In order to get six days of manna in a row, it had to start on Sunday morning. Therefore, the day they arrived was a Sabbath. which was the 15th day of the second month.

Ex 16:1 On the fifteenth day of the second month after they had left the land of Egypt, the whole congregation of Israel set out from Elim and came to the Desert of Sin, which is between Elim and Sinai. 2 And there in the desert they all grumbled against Moses and Aaron.
Ex 16:8 And Moses added, “The LORD will give you meat to eat this evening and bread to fill you in the morning, for He has heard your grumbling against Him. Who are we? Your grumblings are not against us but against the LORD.” 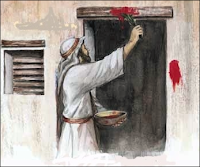 Knowing the 15th day of the second month is a Sabbath, work back to the Exodus. This assumes there are 30 days in the the first month of the Hebrew calendar. Some argue that in the days of Moses, the new month began when the crescent moon was visible, not always 30 days.  It became fixed at 30 days sometime later - Chabad.org(Hebrew months) [3]. Josephus writes that the food they brought from Egypt lasted 30 days, implying Iyar (second month) 15 and a 30 day Nisan - Antiquities Of the Jews [4], line 4401. Working back shows Passover on Tuesday night & Wednesday daytime, and the Exodus on Wednesday night & Thursday daytime. Hebrew days start at sunset.

Bullinger in his Companion Bible puts the Exodus on the first day of the week. He says it in Appendix 50, chart 7.1 named "DETAILS OF THE EXODUS WEEK IN 1491 B.C.". Online  versions are hard to read, but he does list the day of the week for every day during Unleavened  Bread, the 15th is labeled "1st day of the week" - Bullinger(App 50) [5]. Some speculate it was because he made the 1st of Nisan the 1st day of the week also, though I haven't found that statement in Bullinger - COGMI(Exodus_6) [6]. I think Bullinger got it right concerning the day of Passover, but not the day of Exodus.

What day is Pentecost (Shavuot)?

This controversy has been around for at least 2000 years. During New Testament times, there were three schools of thought about the day,  the Pharisees,  the Sadducees, and  the Essenes. They all agreed that the count to Pentecost was tied to Unleavened Bread, but differed in details, arriving at different days. The Essenes had their own calendar where every year started on a Wednesday, and believed that the count to Pentecost began with the first Sunday after Unleavened Bread. The Essenes were all killed, and as far as I know, no one today uses their calendar or their method of counting Pentecost.
That leaves Pharisees and Sadducees. Pharisees taught that the count began on the second day of Unleavened Bread, while the Sadducees taught it began on the day after the weekly Sabbath during the Feast. Both claim to be following what is written in Leviticus.

Lev 23:16 You shall count fifty days to the day after the seventh Sabbath; then you shall present a new grain offering to the LORD. 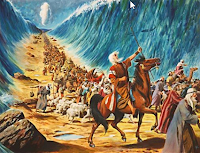 I know of three theories on the subject.
Let me deal with the last theory first. This is promoted by Stephen Rudd in his book  Exodus Route Restored [9]. I have not read his book, but he gives a chart showing the Red Sea crossing 25 days after Passover. He places the Exodus on Thursday, 8 days travel to Succoth, 8 more days to arrive at the Red Sea,  and camping there for 8 days before crossing. While Rudd references Exo 14:6-9 to support his theory, those verses don't say how long they travelled, or how long they camped on the west side of the Red Sea before crossing. So I find this the least convincing theory.

Many teach that the Red Sea crossing happened on the seventh (last) day of Unleavened Bread. This includes branches of the Churches of God (other churches don't seem to comment on it), Jews, Messianic Jews, and individuals. Some quotes.

Jewish tradition says they crossed the sea on the seventh day of the Passover week -  Chabad.org [11]

Seven days after Israel left Egypt after the first Passover, the new nation went through the Red Sea - Hallel.info [12]

The Israelites crossed the Red Sea on the last day of the Feast of Unleavened Bread - ucg.org [13]

“Speak to the children of Israel, that they turn and camp before Pi-hahiroth, between Migdol and the sea, opposite Baal Zephon; you shall camp before it by the sea.” This is the start of the 21st day—the last day of the Feast of Unleavened Bread - Don Roth [14].

While most branches of the Churches of God teach the seventh day crossing, some offshoots of the Worldwide Church of God (WCG) teach that the crossing happened on the fourth day, which would be on the Sunday that we now call the Wave Sheaf Day or Pentecost. Before 1965, the WCG Correspondence Course "contained no assertions or conclusions about the Israelite's day-to-day passage during that initial seven-day Feast" - COG Eternal [15], HWA Library [16]. In this theory, three days after the Wave Sheaf Day, Israel sacrificed in the wilderness on the seventh day of Unleavened Bread. Num 33:5-8 shows three encampments after Rameses: Succoth, Etham, and Pihahiroth. If each encampment lasts a day, the crossing was Sunday the fourth day. If Israel stayed at Etham for the weekly Sabbath, then travelled south on Sunday, they camped at two unidentified locations Sunday and Monday nights before reaching Pihahiroth, then they crossed on the seventh day. The sacrifice at Marah would have been three days after the Feast of Unleavened Bread. God has a pattern of timing important things on His Holy Days. While both theories have a big event happen on the seventh day (Red Sea crossing or sacrifice in the wilderness), the seventh day crossing theory neglects Wave Sheaf Day and has the sacrifice after the Feast of Unleavened Bread.

I see problems in both theories, fourth and seventh days. One problem in the seventh day theory is textual - it requires two unidentified camp sites that Moses didn't mention. Another problem is the sacrifice at Marah is after Unleavened Bread. One problem in the fourth day theory is logistics - getting a million+ people to walk that far that fast. Knowing the route of the Exodus might resolve the issue, but the scholars don't agree on that. So, like a number of things, do your own research and make up your own mind.

Two of these "day" questions have theological implications, two do not. It very much matters what day Jesus was crucified, it means the difference between keeping Passover or keeping Good Friday. And it very much matters what day Pentecost is, it means the difference between keeping it "on the morrow after the Sabbath" or keeping it on Sivan 6 regardless of the day of the week.
As far as I can tell, what day Israel left Egypt and what day they crossed the Red Sea don't change any observances for us today.
References
1. https://www.companionbiblecondensed.com/AP/ap156/index.html
2. https://www.ucg.org/bible-study-tools/booklets/easter-the-rest-of-the-story/three-days-and-three-nights
3. https://www.chabad.org/library/article_cdo/aid/2263459/jewish/Hebrew-Months.htm
4. http://josephus.org/
5. http://www.posterite-d-abraham.org/BULLINGER/APP50_20.htm
6. https://thecogmi.org/video/exodus-6.htm
7. http://qbible.com/hebrew-old-testament/leviticus/23.html#16
8. https://www.nehemiaswall.com/truth-shavuot
9. https://www.bible.ca/exodus/
10. https://www.bible.ca/archeology/bible-archeology-exodus-route-travel-times-distances-days.htm
11. https://www.chabad.org/library/article_cdo/aid/246647/jewish/Parting-of-the-Red-Sea.htm
12. https://hallel.info/seventh-day-of-the-feast-of-unleavened-bread-%E2%80%94-significance-then-and-today-of-israels-crossing-of-the-red-sea/
13. https://www.ucg.org/the-good-news/gods-plan-as-revealed-by-his-holy-days
14. https://www.biblicalcalendarproof.com/articles/passover-crossing-red-sea
15. https://www.cogeternal.org/2000s/01055_0405crossredseajwb.htm
16. https://www.hwalibrary.com/cgi-bin/get/hwa.cgi?action=getbstudy&InfoID=1496918457&InfoType=Study58
Posted by John Freeman at 9:33 PM No comments: