Many consider Yom Kippur to be the holiest day of the year, because it was the only day the High Priest could enter the Holy of Holies of the Tabernacle. In English, we call Yom Kippur the Day of Atonement. However, it seems the word atonement has lost any real meaning - Yom HaKippurim [1]. Some people talk about being "at one" with God, but the Hebrew word kippur doesn't mean "at one", though that may be the ultimate result. "It is obvious that the English word 'atonement'  does not correspond etymologically with any Hebrew or Greek word which it translates." - Bible Study Tools (Atonement)  [2]. The Bible doesn't even call the day Yom Kippur, it calls it Yom HaKippurim or Yom Kippurim, plural not singular kippur, whatever kippur means, which we will get to later. It would be better to say Day of Atonements. If you have achieved at-one-ment with God, how do you achieve more than one at-one-ment? Are you at one twice?


If you like this (or not), check out my other articles at the
Between The Ears BLOG INDEX, article titles and summaries.

"Make for yourself an ark of gopher wood; you shall make the ark with rooms, and shall cover it inside and out with pitch.

Both the word "cover" and the word "pitch" are kippur. A number of translations say to "pitch in inside and out with pitch", ie. pitch it with pitch. In Hebrew, it reads to kafar it with kofer (In Hebrew, vowels don't matter, p and f are the same). Cover is the root meaning for kafar, though it has other meanings we will see later. "In fact, the English word "cover" can most likely be traced back etymologically to the Hebrew word kafar" - Yom HaKippurim [1]. That would make it "cover it with covering" - Ridiculous KJV Bible Corrections [3]. One meaning then of Yom HaKippurim is Day Of (The) Coverings.


What is to be covered? The first answer is "cover our sins". The pitch of Noah's ark symbolizes the blood of Jesus which covers our sins. Note the similarity to the Passover Lamb's blood on the doorposts. Pitch is smeared on the ark, lamb's blood is smeared on the posts and lintel of the door frame, and Jesus' blood was smeared on the cross - all three made of wood. This is important - the covering is blood, and it cleanses us from sin.

Lev 16:30 for it is on this day that atonement (kafar) shall be made for you to cleanse you; you will be clean from all your sins before the LORD.

Heb 2:17 (CJB) This is why he had to become like his brothers in every respect - so that he might become a merciful and faithful cohen gadol (high priest) in the service of God, making a kapparah for the sins of the people.

1 John 4:10 (CJB) Here is what love is: not that we have loved God, but that he loved us and sent his Son to be the kapparah for our sins.

Here is how Dr John Hinton of the Bible Restoration Ministry [4] put it, "As kopher was used to cover the ship that provided for the salvation of the righteous, which amounted to God's forgiveness of mankind whom he would otherwise have destroyed completely, so those who accept Christ's offer are forgiven by being covered by his blood." - Ridiculous KJV Bible Corrections [3]. 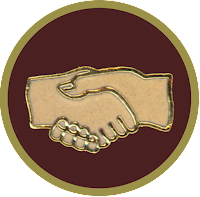 The meaning (of Kippurim) has two connotations to it: One, that a person repents for his sins that he has committed against HaShem (God) and asks HaShem for His forgiveness, and the other is to ask for repentance from your fellow man for the sins that you have committed against him - Betemunah [5].

Cover has another meaning that fits here. When we ask God for forgiveness, in a sense we are asking Him to cover His eyes, as if He didn't see sin happen. "The covering over of another's eyes to make it as if he didn't see certain events that happened in the past, specifically negative events. This 'covering' is usually accomplished by the giving of some kind of monetary reward or gift to the person in order to 'help' him forget." -  The Day of Getting Yehowah to Cover His Eyes And Forget [6]. A monetary gift would not work to buy God's forgiveness, but our fellow man may accept a payment in place of vengeance. This is my understanding of the real meaning of "an eye for an eye", payment instead of reciprocal injury. Covering the eyes works in a negative sense too, "for a bribe blinds the eyes of the wise" - Exodus 23:8.

I mentioned above that kafar has other meanings, several in fact. Each meaning of kafar adds layers of meaning to Yom Ha Kippurim. According to Betemunah [5], kafar can mean  "to appease, make atonement, cleanse, disannul, forgive, be merciful, pacify, pardon, purge away, put off, and make reconciliation". And just as kafar has multiple meanings, so does Yom Ha Kippurim. Whether you believe that atonement is cover, or ransom, or substitution, or all three, the day and its rituals are full of symbolism.

The Ark Of Moses

Q. How many animals did Moses take onto the ark?
A. None, it was Noah who built the ark.

If a person answered anything else, you could Bible shame them. Ah, good times.

The word tevah is only used in two stories in the Bible, Noah's ark, and Moses' ark. Yes, Moses had an ark. Remember the story of baby Moses in Exodus 2?

1 Now a man from the house of Levi went and married a daughter of Levi. 2 The woman conceived and bore a son; and when she saw that he was beautiful, she hid him for three months. 3 But when she could hide him no longer, she got him a wicker basket and covered it over with tar and pitch. Then she put the child into it and set it among the reeds by the bank of the Nile. 4 His sister stood at a distance to find out what would happen to him.

That "wicker basket" was a tevah, that is, an ark.

A Bible study principle that I learned from Grant Luton of Beth Tikkun [3] is to look for words, names, places that only occur twice. The idea is that the two passages are related somehow. And each helps to explain the other. As this example shows, you wouldn't guess that the ark and the wicker basket were both tevah, nor that Noah's ark and the ark of the covenant weren't the same word unless you examined the Hebrew.

What can we learn by comparing and contrasting these two uses of tevah? How are Noah and Moses alike? different? And what theme connects the two?

They both saved the occupants from a watery death.

They were both covered with waterproofing, "pitch" in English.

They were both boxes.

Neither ark had propulsion or steering.

Noah saved all who had the "breath of life", man and animals, Moses saved Israel (and eventually all mankind).

Noah’s ark was “a huge, rectangular box, with a roof" - Westermann,  LDS [5], it had three levels and rooms (nests), Moses' ark was a small basket that fit one baby.

While both arks were covered with pitch, the words used are different. Noah's ark was covered inside and out with "kopher",meaning cover or ransom - If I Could Teach the Bible [6], the same word as in Yom Kippur. Moses' ark was covered outside with "chemar", which the King James calls slime. The only other place chemar is used is the story of the tower of Babylon. Another double. What is the connection between Moses' ark and the tower?

Noah and family were in the ark over a year, Moses less than a day.

Noah and perhaps his sons built his ark, Moses' mother Jochebed built his ark, Miriam followed it, and the Egyptian princess and her maidens drew him out of the water. Four men versus three women.

Noah was a very old man (600 years), Jochebed was a young mother, and Moses was three months old.

Specific dimensions are given for Noah's ark, not for Moses' ark, we don't even know if it had a cover.

Noah knew what was coming, Jochebed did not, but she gave up her son to God in a very literal way, without knowing the outcome. I wonder how she came up with this plan, which did fulfill the literal word of Pharoah's decree to cast the Hebrew baby boys into the Nile.

The similarities and differences help us to see what characteristics of arks do and don't matter. The builder, size, dimensions, materials, and length of stay don't seem to matter. A tevah could be described as a waterproof box for people.

Water is obviously important in both stories. Normally water is associated with life, but here water means death. Note that the flood waters were bloody from the men that drowned, and the Nile was bloody from the Israelite boys Pharoah ordered drowned. God's first plague on Pharoah and Egypt was to turn the Nile to blood.  "From the first, then, the waters of Egypt are the waters of death; the Nile is a river of blood long before Yahweh makes this visible in the first plague." - Exegetica [7]. And Pharoah himself drowned in the Red Sea pursuing Israel (not the same Pharoah who ordered the boys be drowned however).

Speaking of water, Moses' name (Moshe) means drawn out, so named because the princess drew him out of the river. Moses later draws water out of a well for seven sisters in Midian, one of which, Zipporah, became his wife. Later still, Moses draws water out of a rock in the wilderness. And he drew Israel out of Egypt, by passing them through the Red Sea.

The arks (tevah) picture Jesus Christ. He is the one that saves from the watery death. Noah and Moses picture Jesus as well inasmuch as they are both saviors of mankind, but they also picture all of us. We need saving from the waters of death, just like Noah, Moses, and Israel. We need to be inside Jesus.

When Israel left Egypt, they were hemmed in by mountains and the Red Sea. God opened a completely new way for them through the Red Sea. Here is the description from Exodus 14

22 The sons of Israel went through the midst of the sea on the dry land, and the waters were like a wall to them on their right hand and on their left. 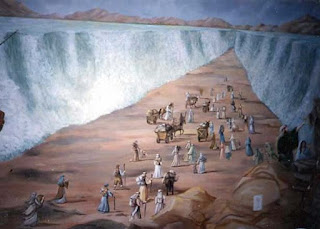 Dry land beneath them, walls to the right and left. To me, that sounds like a box, a tevah if you will. It protected them from a watery death like Noah's tevah and Moses' tevah. All Israel passed through the Red Sea via a tevah to the wilderness. The Bible doesn't call the opening in the Red Sea a tevah, but it served the same purpose.

Tevah has two other meanings. It can mean "word". Since a tevah pictures Jesus, and Jesus IS the Word, it is very fitting. If you're in Jesus, you're safe, if you're outside Jesus, you're not.

The Hebrew word tevah not only means “ark,” but it also means “word.” Thus a student of the Torah is prompted to “go into the word,” the sacred task of discovering hidden meanings enfolded into each tevah. - Worlds Within Words - [8].

Tevah can also mean "coffin" - Noah Had a Tevah [9]. Here the symbolism is reversed, coffins normally carry the dead, but in these cases, the coffin (tevah) carries the living, the dead are the ones outside the tevah. For an individual believer, the coffin carries us across the waters of death to the kingdom of God. 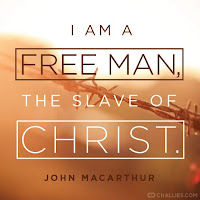 It's all about deliverance.