In a TV show I watched recently, a man undertook a Native American ritual of self inflicted pain to "set things right in the universe". He suffered severe pain and deprivation to make amends for wrongs he had done, after which his daughter was healed. Of course, that's TV. But the notion of self inflicted pain for spiritual gain is not confined to Native Americans, it is in many religions. The Roman Catholic Church has a well developed theology concerning what they term penance. Usually, a priest would decide on the act of penance, also called epitemia. But it appears the more zealous can add to the penances.
Acts of self-discipline are used as tokens of repentance. Easier acts of self-discipline include devoting time to prayer or reading of the Bible or other spiritual books. Examples of harder acts of self-discipline are fasting, continence, abstaining from alcohol or tobacco, or other privations. Self-flagellation and the wearing of a cilice* are more rarely used. Wikipedia - Penance [2]


Other religions are mentioned in the Wikipedia article. The Eastern Orthodox Church practices penance similar to the Catholics without the confession to a priest. Anglicans practice confession and penance, so do Methodists. Apparently, Lutherans do not. To show how universal self inflicted pain for spiritual reasons, consider this.


Rituals of expiation and satisfaction appear in most religions, whether primitive or developed, as the means by which the religious person reestablishes or strengthens his relation to the holy or divine. Atonement is often attached to sacrifice, both of which often connect ritual cleanness with moral purity and religious acceptability. Britannica [3]

We see above two reasons for self inflicted pain, one is to make amends for one's sins, and two is to gain spiritual favor, insight, or closeness to God. Does it work? Is God pleased with flagellants? [4] It appears self inflicted pain makes the person feel less guilty. In an experiment with college students, Dr Bastian of The University of Queensland observed this.


Humans have been socialised over ages to think of pain in terms of justice. We equate it with punishment, and as the experimental results suggest, the experience has the psychological effect of rebalancing the scales of justice and therefore resolving guilt. Medical Xpress [5]

But logically, the person who self-inflicted pain is exactly as guilty as they were before the pain - they only felt less guilty. Say one breaks a traffic law, like running a stop sign, does contrition and remorse or even pain make them any less guilty? No.

Does this "Do It Yourself Atonement" work? Can I make it right with the universe by inflicting pain on myself? Can I do acts of charity to balance out the score? In my own life, I have committed plenty of wrongs I would like to right, many people I've hurt, beginning with my parents. I wish I could say that was before I began to believe in God and believe God, before striving to live by His word, that is, before I knew Him. But I've committed wrongs since then I would like to undo. And in many ways those hurt me more, because I should know better, because I've let my Father down, and I want to make it up to Him. So, how do we make it right with God?


It's All About the Tabernacle 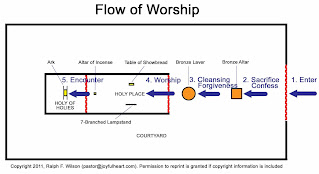 It may surprise you that the Tabernacle of ancient Israel is a template of how to approach God, and it is full of other symbolism as well. To approach God, who dwelt in the innermost part of the Tabernacle, called the Holy of Holies, one entered the Tabernacle through its only door, on the east side. That door is Jesus Christ, "I am the door of the sheep." - John 10:7,9. "And there is salvation in no one else; for there is no other name under heaven that has been given among men by which we must be saved" - Acts 4:12. The first item one encounters in the Tabernacle is the bronze altar, used for animal sacrifices. You can't go any further towards the Holy of Holies till a sacrifice is made.

But the Bible is very specific about the sacrifices, a lot of "column inches" are devoted to them. The point here is that it is not a do-it-yourself sacrifice. You and I don't get to decide the sacrifice God must accept. Sacrifices were substitutions, an animal's life instead of a human. These sacrifices ultimately picture Jesus, substituting Himself, that is some aspect of His life and ministry, for us. And the priest who performed the sacrificial ceremony also pictures Jesus, especially the High Priest. It's all about Jesus' sacrifice, not ours.

What about fasting? It is a voluntary self denial (mandatory on Yom Kippur), a kind of self inflicted pain. Fasting is known in the KJV Bible as "afflict your soul", it's not talking about a health fast. But fasting is not about making the universe right. Fasting is not a hunger strike to get your own way from God. Fasting tells God that His ways are more important to you than food itself. Fasting is about humbling your self. Then He will restore you, read Isaiah 58:1-11 below.

So people have the rightful notion that a sacrifice is the first step towards reconciliation with God, but we have twisted that sacrifice to be one of our own choosing. Self inflicted pain may make us feel less guilty, but it is Jesus sacrifice that actually makes it so. I want to make it up to God, I'm disappointed in myself for letting him down. I think this impulse is in all of us based on the fact that all religions have some sort ritual of expiation as explained above. This may be why we have an intuitive notion of sacrificing in order to reconcile with God. But there are many wrongs we can't right. The obvious examples would be things like murder or crippling someone. We can't reconcile with people who have passed away. We can't take back adultery, etc. Alcoholics Anonymous Step 9 says "Be willing to make amends" AA [6]. And the Bible says "Bring forth fruits in keeping with your repentance" -  Mt 3:8. Yes we should make amends, but we can't fix everything. We can't do it all ourselves.

Jesus did the heavy lifting. Our part is to "repent and believe the gospel" - Mark 1:15. As a nation, we've got a lot of repenting to do. Then live in such a way as to "present our bodies a living sacrifice, holy, acceptable unto God, which is your reasonable service" - Rom 12:1.

1 Cry loudly, do not hold back;
Raise your voice like a trumpet,
And declare to My people their transgression
And to the house of Jacob their sins.
2 Yet they seek Me day by day and delight to know My ways,
As a nation that has done righteousness
And has not forsaken the ordinance of their God.
They ask Me for just decisions,
They delight in the nearness of God.
3 ‘Why have we fasted and You do not see?
Why have we humbled ourselves and You do not notice?’
Behold, on the day of your fast you find your desire,
And drive hard all your workers.
4 Behold, you fast for contention and strife and to strike with a wicked fist.
You do not fast like you do today to make your voice heard on high.
5 Is it a fast like this which I choose, a day for a man to humble himself?
Is it for bowing one’s head like a reed
And for spreading out sackcloth and ashes as a bed?
Will you call this a fast, even an acceptable day to the Lord?
6 Is this not the fast which I choose,
To loosen the bonds of wickedness,
To undo the bands of the yoke,
And to let the oppressed go free
And break every yoke?
7 Is it not to divide your bread with the hungry
And bring the homeless poor into the house;
When you see the naked, to cover him;
And not to hide yourself from your own flesh?
8 Then your light will break out like the dawn,
And your recovery will speedily spring forth;
And your righteousness will go before you;
The glory of the Lord will be your rear guard.
9 Then you will call, and the Lord will answer;
You will cry, and He will say, ‘Here I am.’
If you remove the yoke from your midst,
The pointing of the finger and speaking wickedness,
10 And if you give yourself to the hungry
And satisfy the desire of the afflicted,
Then your light will rise in darkness
And your gloom will become like midday.
11 And the Lord will continually guide you,
And satisfy your desire in scorched places,
And give strength to your bones;
And you will be like a watered garden,
And like a spring of water whose waters do not fail.

Posted by John Freeman at 9:58 PM No comments: