Hamas in the Bible

The Hebrew word that parallels the name of the Islamic terror group can itself be traced back to the Arabic. Etymologist Ernest Klein writes that the Hebrew hamas is linguistically linked to the Aramaic word hamas and the Arabic word hamisa, both meaning “was hard,” …

Messianic Teacher Glenn Kay has done some research on hamas in the Bible, finding that it occurs 68 times (messianicfellowship [4]). Strong’s Concordance (Biblehub [5]) lists 60. The first of these is in Genesis, and it’s cited as the primary reason for the flood. Gen 6:13 “The end of all flesh is come before Me, for the earth is filled with violence (hamas) through them; and, behold, I will destroy them with the earth.”

In a TV interview August 2014, Rabbi Jonathan Cahn explained to Jim Bakker several of the verses from the Bible that contain the word hamas. Here are some of them, but I encourage you to watch the interview for yourself, it’s only four minutes (YouTube [6])

Psalm 74:20 For the dark places of the earth are full of the dwelling places of hamas. (Cahn points out the similarity to tunnels)

Psalm 11:5 But the wicked and he who loves hamas His soul hates.

Isaiah 53:9 Because He had done no hamas, Nor was any deceit in His mouth. (Speaking of the Messiah Jesus Christ)

Obadiah 1:10 For hamas against your brother Jacob, Shame shall cover you, And you shall be cut off forever. (The eventual reward for HAMAS)

Isaiah 60:18 For hamas shall no more be heard in you land. (The eventual reward for Israel)

Roots of the Israel/Palestine conflict

The Israel/Palestine conflict is thousands of years old, originally a family feud and now a religious conflict, rather than a political one. Don’t take my word for it, here’s what Article 15 of the HAMAS charter says “It is necessary to instill in the minds of the Moslem generations that the Palestinian problem is a religious problem, and should be dealt with on this basis (HAMAS Charter [7]). If the Moslems think it’s a religious problem, the West would be making a mistake to treat it as a political one. The HAMAS charter also really does call for the destruction of Israel “Israel will exist and will continue to exist until Islam will obliterate it, just as it obliterated others before it”. In a commentary entitled “Hamas in Prophecy [8]” written in 2006, Tom Robinson of United Church of God [9] examines hamas in the Bible and gives historical background, which is even more important for us to understand today. Here is a short quote from the article.


The Bible has much to say regarding the clash between Israel and the Palestinians, tracing the roots of this ancient blood feud and declaring how it will ultimately be resolved. The conflict actually goes back to two sibling rivalries—between Abraham's sons Ishmael and Isaac (see Genesis 16–17; 21) and between Isaac's sons Esau and Jacob (see Genesis 25; 27–28). Ishmael was the father of many of the Arabs while from Isaac, through Jacob, came the Israelites. …


Hamas reminds me of this verse “John 16:2 the time comes, that whosoever kills you will think that he does God service.” Allah is not God, and they are not doing God a service.

Posted by John Freeman at 8:43 PM No comments:

The Gospel In Six

A while back, I posted a challenge to our local church Facebook group:


Describe the gospel in 25 words or less. Can we explain it to someone without diving into too much detail? Suppose we all wore Tshirts that said "Ask me about the Gospel". You get on an elevator with someone, they say "I'll bite, tell me about the gospel". You have 7 seconds (25 words) to get them to say "Tell me more".

I didn’t get a lot of responses, but here is my attempt “You're gonna die, you're not going to heaven or hell. But God, through Jesus, has a plan to bring you back to life, forever. Interested?" I know, I used two contractions and “gonna” to keep it to 25 words. It’s the best I’ve come up with so far. Perhaps you can do better.

What if I told you that God managed to pack the gospel into one word of six letters? Yes we have to go back to Hebrew to see it. But it is the very first word in the Bible. In English, the Bible starts “In the beginning”, in Hebrew it starts “beresheet”, that is בראשית. The word Beresheet has also come to mean the first book of Moses, what we call Genesis in English.

This is Beresheet in an actual torah scroll (sefer torah) used in a synagogue. It’s crooked because it’s a photo of an uneven scroll. 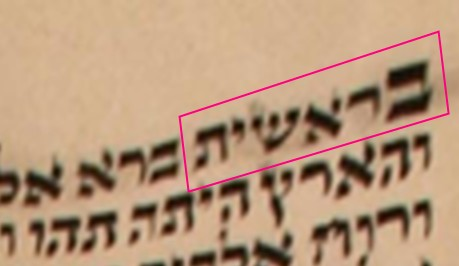 Since Hebrew is written without vowels, this gives different ways to parse a word like beresheet. We will consider three ways – maybe there are more.

Number 1 (B’resheet ) is the usual meaning of the word – in the beginning, although it would be more accurate to translate it “in a beginning” - see Kehillat Israel (2).


The Amazing Word of God (3) - If you take the word for "son" in Hebrew (bar) and the word for "I make" (asheet) and put them together, you have the first word of the Scriptures: "in the beginning" (barasheet).

In case you remembered the Hebrew word for son is “ben”, as in Benjamin, Yahoo Answers (5) explains.


Q. In Hebrew bar and ben both mean 'son of' what is the difference that determines which you use?

A. This is an easy one: "ben" is Hebrew, "bar" is Aramaic. In Hebrew you always use "ben" except for imported phrases such as "bar mitzvah" or names like "Shim'on bar Yokhai".


Grant Luton of Beth Tikkun adds this in his article In The Beginning (6).


Now if we recombine the definitions of these two Hebrew words, we arrive at the phrase “A Son I shall put/place/appoint”. A better rendering might be, “A Son I shall establish.” The introduction of only a slight separation between the second and third letters of the Bible provides us with this insight


Let’s look at number 3 – (Bara’sheet) - Bara (ברא) is the second word of the bible and means “he created”. Sheet is a variant of shesh (שש) or “six”. The question is “six what?” We have to read through verse 3 to see it, but one answer is six alephs (א). There are six alephs in the first sentence of the Hebrew Bible (verses 1-3). And aleph sounds exactly like eleph (אלף), which means “thousand”. In other words, six alephs equals six thousand years. Two alephs during the darkness (verses 1-2) two alephs where God speaks (verse 3), and two alephs in “let there be light” (verse 3). In other words, 2000 years of darkness till Abraham, 2000 years after revealing his torah, and 2000 years in the light of Christ. Note the progression from darkness to speech to light. Luton gives much more detail about the derivation at In The Beginning (6) and also shows where this notion came from:


The Talmud also suggests allusions to Messiah in the opening words of Genesis. The Talmud (b.Avodah Zarah 9a) states the following:


The Talmud quote can be found in Avodah Zarah (7) at juchre.org.

So if we put them all together [B’resheet, Bar’asheet, Bara’sheet], taking a little license, we have “In the beginning, God appointed a Son, and gave man six thousand years”.

Admittedly, you have to read through verse 3 plus other sources to get the interpretation of 6000 years, so technically it wasn’t one word. But still it is an incredible thing – the essence of the gospel in one six letter word.

These observations in the Talmud were made many hundreds of years ago, Wikipedia dates this tractate to about 100AD [wikipedia - Avodah Zarah (8)]. What we know as the “six thousand year plan” has been known for thousands of years already. It isn’t an idea discovered in these end times, but it is all the more urgent now to understand that time is up, and Jesus is returning soon. It was foretold from the first word of the Bible.