Is the COVID-19 Vaccine the Mark of the Beast?

The assertion is based on this verse.

Rev 13:16 -17 It (the Beast) also forced all people, great and small, rich and poor, free and slave, to receive a mark on their right hands or on their foreheads, so that they could not buy or sell unless they had the mark,

If you like this (or not), check out my other articles at the
Between The Ears BLOG INDEX, with titles and summaries.
I have been searching the Internet to find out who exactly is saying the COVID-19 vaccine is the Mark of the Beast. Many see it as a well known fact that Evangelical Christian leaders are saying it - Washington Post [1], but I only found a couple names, the most familiar being Kanye West, "It all started with Kanye West."- CrossTalk [2], ChristianPost [3]. However, I don't think Kanye came up with that by himself. A less familiar name is Louisiana Pastor Ronnie Hampton of New Vision Community Church  - Christianity Today [4]. Or pastor Guillermo Maldonado of Miami megachurch King Jesus International Ministry. Some blame a Youtube video (unavailable) by Lackey (no first name). Or Gab founder Andrew Torba - Washington Post [1].

But What Does The Bible Say?

Revelation 13:15-18 11 Then I saw another beast coming up out of the earth; and he had two horns like a lamb, and he spoke as a dragon. 12 He exercises all the authority of the first beast in his presence. And he makes the earth and those who live on it worship the first beast, whose fatal wound was healed. 13 He performs great signs, so that he even makes fire come down out of the sky to the earth in the presence of people. 14 And he deceives those who live on the earth because of the signs which it was given him to perform in the presence of the beast, telling those who live on the earth to make an image to the beast who *had the wound of the sword and has come to life. 15 And it was given to him to give breath to the image of the beast, so that the image of the beast would even speak and cause all who do not worship the image of the beast to be killed. 16 And he causes all, the small and the great, the rich and the poor, and the free and the slaves, to be given a mark on their right hands or on their foreheads, 17 and he decrees that no one will be able to buy or to sell, except the one who has the mark, either the name of the beast or the number of his name. 18 Here is wisdom. Let him who has understanding calculate the number of the beast, for the number is that of a man; and his number is six hundred and sixty-six.

Mark on hand or forehead

Verse 16 says the mark, whatever it is, will be on a person's right hand or on their forehead. Vaccinations are given by injection in the upper arm. It just isn't given in the hand or the forehead.

Worship the First Beast
The Beast that  causes everyone to get said Mark is the second Beast. The first 10 verses of Revelation 13 describe this first Beast as being worshiped, having a deadly wound which healed, gets his power from the dragon, speaks blasphemies, has power 42 months, and makes war with the saints. The second Beast causes everyone to worship the first Beast, calls fire down from heaven, and is known by his number, 666. Many teach that the second Beast is a religious figure, probably the Pope. It is clear that these two Beasts are not in power now. I do believe we are in the end times, so they may be alive today, but until someone brings fire down from heaven, those Beasts are not on the scene yet.
Note that the first Beast is worshiped. This is reminiscent of emperor worship in the first century AD. Christians who would not give the sign of worship were thrown to the lions. I see emperor worship as a type of the Mark of the Beast.

Under Domitian (81-96 AD) in the time of this letter, emperor worship was compulsory for every Roman citizen. The burning of the pinch of incense was rewarded by a certificate which had to be renewed annually. Failure to produce a certificate meant being branded as Christian and this opened the way, if the magistrates so decided, for the death penalty on the ground of treason. - attributed to James Allen “What the Bible Teaches – Revelation” - That Pinch Of Incense [7]

The Timing
Many events must take place before the Beasts show up. God's judgment of man is pictured as seven seals, beginning in Revelation 6. The seventh seal is made up of seven trumpets. And the seventh trumpet is made up of seven bowls or vials of wrath. The pattern for the seals, trumpets, and bowls is that the first six are described without a break, then a pause, then the seventh. This is shown graphically in the chart below from Chuck Missler [8]. The Mark of the Beast occurs during a five chapter pause (Rev 10-14) between trumpet #6 and trumpet #7. The first four seals are also known as the Four Horsemen of the Apocalypse, during which one quarter of mankind is killed. The fifth seal is large scale martyrdom, the sixth seal is signs in the heavens. The seventh seal is opened in Revelation 8, and the seven trumpets begin. After the sixth trumpet there is a pause, it is then that the Beasts rise to power.
While researching who said the vaccine was the Mark of the Beast, I found many who recognize the vaccine is not the Mark of the Beast, but who described it as conditioning for the Mark, a trial run to normalize it. Certainly many people have concerns about the vaccine itself, but also fear another trending development - the vaccination passport aka immunity passport, which reminds me of the emperor's certificate of loyalty. And with high tech manipulation, the immunity passport could indeed morph into the Mark of the Beast.

Jack Hibbs, a pastor, said in a sermon that he believes the COVID-19 vaccine is a social control tactic that is conditioning people to accept the mark of the beast. Belief Net [10]
Right-wing pastor Curt Landry posted a video on YouTube on Tuesday in which he told viewers never to accept any vaccine that is created to prevent the spread of the COVID-19 coronavirus because the vaccine will be a precursor to the biblical Mark of the Beast. Right Wing Watch [11]
The global society has to be conditioned in such a way as to submit to the mark, the beast, and the false prophet, in person or in proxy for the MARK to be effected. Duncan Mango [12]

The objective of such rules is nothing to do with public health; they are intended to exasperate us all to the point where we yield to the indignity of vaccine passports when they are rolled out, just so we can live our lives and be left in peace. Out Of Mind [13]

Advocates of COVID passports visualize a world where we can’t pass through a door to a plane, workplace, school, or restaurant until the gatekeeper scans our credentials. In no time the public would be conditioned to submit to these demands.

This digital system could easily be expanded to check not just a person’s immunity status, but any other bit of personal information a gatekeeper might deem relevant, such as banking information, age, pregnancy, HIV status, or criminal history; and all data – your data – could be accumulated into one database.  Clarion [14]

Without debate or democratic scrutiny, vaccine passports are quickly heading from unthinkable to unstoppable.
Vaccine identity cards could be demanded ‘in hospitality settings’ — in other words, in pubs.
As ever, in our new Orwellian world, the reverse language is used — restrictions will be lifted for those who comply. Spectator.co.uk [15]

No one knows exactly what the Mark of the Beast will be. But it seems likely to me to be a high tech version of the emperor's certificate because that certificate involved worship and commerce. I think China is leading the way on controlling commerce with its Social Credit System [16], a national reward and punishment system; plus China's efforts to create a digital currency - Wall Street Journal [17]. A Social Credit System and a digital currency would give China the power to control all its citizens buying or selling.

The Mark Of The Lamb

Let's take the focus off the Beasts and put it on Jesus Christ where it belongs. God gave the Revelation to Jesus who gave it to John. Twice, Revelation refers to believers who have a seal on their foreheads, and this seal is the name of the Lamb's Father, that is God Himself. Decide for yourself if these two passages refer to the same 144,000. 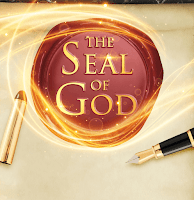 Rev 7:3  “Do not harm the earth, or the sea, or the trees until we have sealed the bond-servants of our God on their foreheads.” 4 And I heard the number of those who were sealed: 144,000, sealed from every tribe of the sons of Israel:
Rev 14 Then I looked, and behold, the Lamb was standing on Mount Zion, and with Him 144,000 who had His name and the name of His Father written on their foreheads.

Ephesians 1:13 having also believed, you were sealed in Him with the Holy Spirit of the promise